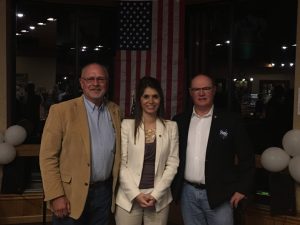 Christina Dinkins of Annapolis, center, has announced her plans to run for state representative in the next legislature election. State Rep. Paul Fitzwater, at right, is term limited and will not be able to run again.

State Representative Paul Fitzwater (R, Potosi) is term-limited and cannot run for re-election. Fitzwater represents Wayne, Reynolds, Iron, and a small portion of Washington counties.
Several people have been contemplating running for the vacant seat. An area resident has officially launched a campaign. Fitzwater’s replacement will be elected in November 2018.
Fitzwater’s aide Christina Dinkens of Annapolis officially announced her candidacy last week at the Washington County Lincoln Days celebration. Dinkins is a native of Piedmont and a graduate of Clearwater High School and Southeast Missouri State University.
Dinkins currently serves as the legislative assistant to Representative Fitzwater and as the deputy treasurer for Fitzwater’s campaign committee.  Dinkins resides in Iron County along with her husband at their family farm and operate a small business in Lesterville, Mo.
“I have deep roots in this district”, said Dinkins, “and I have enjoyed having the opportunity to work on behalf of the constituents in this district these last four years.” Prior to her work in the Capitol, Dinkins spent 17 years working in education.
“As a small business owner I’ve seen first hand how burdensome government regulations have been hurting our small business owners and their families.  We have to work on getting government out of the way and getting jobs back to rural Missouri,” Dinkins said.  Among other issues, Dinkins’ speech highlighted the need to keep Obamacare, Common Core, and other federal programs out of Missouri.  “These “one-size-fits-all programs are hurting real Missourians every day.  We need to return control back to local schools, communities, and healthcare providers where they know the needs of their students and neighbors best.”
“The outpouring of support has been humbling since we announced and I am looking forward to getting out into the communities and talking with the voters about the issues most important to them.”