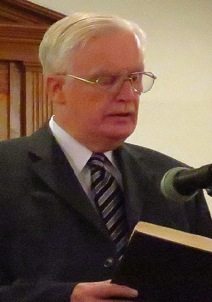 Rev. Paton served as a missionary pastor for many years and served in churches all over the United States. His last pastorate was at Calvary Baptist Church in Chatsworth, Illinois.

He was married to Janet Hyer-Elliott May 28, 1994, at Elyria, Ohio. Bill and his wife Janet had lived at Missionary Acres for the past seven years. He was a member of Evangel Baptist Church.

Also surviving are 12 grandchildren, Benjamin, Marieve, Ethan and his wife Kelsey, Rosalie, Allyssa, Arik, Kaitlyn, Andrew, Kiersten, Kandice, Kacey and Alistair, along with his many friends at Missionary Acres.

Memorial services were held on Tuesday, July 18, 2017 at the Evangel Baptist Church with Rev. Mark Hunsberger, Rev. Steve Little and Bro. Ken Moon officiating. Congregational singing was held, along with special singing by Karis, Kraig and the Elliott family. Services were closed in prayer by Kevin Elliott.

Services were under the direction of Morrison-Worley Funeral Chapel, Greenville. Memorials have been requested to the Evangel Baptist Church.