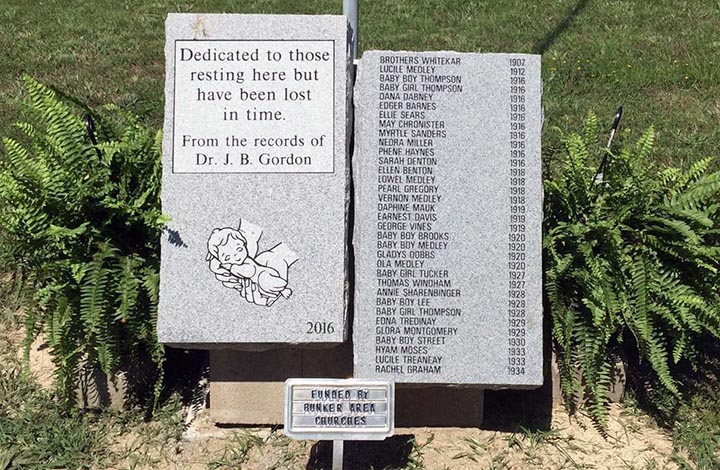 A CHILDREN’S MEMORIAL in Bunker Cemetery is
dedicated to 35 children who died between 1907 and 1934
and today lie under anonymous stones or in unmarked
graves because their parents couldn’t afford a tombstone.

There are 35 graves in the Bunker Cemetery for which the only marker is a rock or long, faded headstone. They stand over the plots of children born to the town’s pioneers, but who lost their lives soon after birth.

Although where each child lies is lost to history, their names are not forgotten, and a memorial now stands at a place of honor in the cemetery to re­member their struggle to join this world.

“You have to recognize the dead, and give them respect, that’s what we are all about down here,” says Clarence Rosemann, president of the Bunker Cemetery. “The prob­lem we have is nobody knows who is down there. We don’t know where many of these children were buried, and many of the plots we do know about have just had a rock to mark the location or must have had only a wood tombstone that is long gone. Back then nobody could afford to have a gravestone made, and a lot of the tomb­stones that were put up were made of limestone, so you can hardly read them anymore.”

The idea for the children’s memorial originated with the late Louise Tucker, who helped found and administer Bunker’s Timber Museum. The museum contains the birth records of Dr. J.B. Gordon, who birthed around 6,000 Bunker babies during the last century. Tucker and her daughter, Carolyn Bar­ton, went through Gordon’s re­cords and found 33 instances in which a young child died and was buried in the cemetery in an unknown grave.

“My mom started going through the records, and I fin­ished when she passed away last year,” Barton says. “Some of the deceased had names, but many of the stillborn babies were only referred to as Baby Boy or Baby Girl. In those cases I added the family’s sur­name plus the year they passed away.”

Rosemann says two other names were added to the list based on records from Dent County historian Ken Fiebelman.

“When I brought the idea of the memorial to the board, they said we didn’t have any funds,” Rosemann says. “I thought to myself, ‘Well all the area churches are invested in this cemetery in one area or another,’ so I sent them a let­ter asking if they would like to participate. They ended up contributing 90 percent of the cost.”

The effort took three years to complete, and the memorial was dedicated June 4 by Lance Martin. The monument was created by Kinwell Granite. It features a dedication to Dr. Gordon as well as the names and dates of Bunker’s fallen children. Twenty-two of the 35 died during a four-year span, 1916 to 1920.

“I can only image what it must have been like to live to see such times,” Rose­mann says. “I have won­dered what must have hap­pened to lose so many those years. You would have had to be tough to be one of Bun­ker’s first settlers. This town was founded for logging by the Bunker-Culler Cor­poration. The truth is, the families that buried these children probably still have descendants that are around this area today.”

Barton says many in Bun­ker have already reconnect­ed to the newly discovered history.

“When we unveiled the memorial this past decora­tion day one of the women there saw a name and thought it must have been a relative. She later came into the mu­seum and found the death record and confirmed it was one of her uncles,” Barton says. “Anyone else who wants to learn more about Bunker’s history or the lo­cal genealogy is welcome to come to the museum. We are open on Thursdays or by ap­pointment.”

Today, the memorial to the children stands in the center of the Bunker Cem­etery within eyeshot of the man who struggled to save their young lives, Dr. Gor­don. Also memorialized in its creation is its originator, Louise Tucker, who dedicat­ed her life to preserving the small town’s history