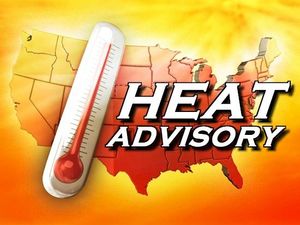 The National Weather Services has issued excessive heat warnings for the Great Plains through Saturday night, July 22, with temperatures of 96-100 degrees and heat indexes as high as 105 to 110 degrees Fahrenheit. Such excessive heat can cause potentially dangerous work conditions­ especially for those working outside and in hot interior spaces.

The U.S. Department of Labor’s Occupational Safety and Health Administration reminds employers and workers to take precautions to stay safe during a heatwave.

On hot days, the agency recommends frequent breaks in a cool or shady environment, and drinking water every 15 minutes. OSHA also urges employers to allow new workers to acclimate and build up resistance to the increased temperatures. A recent study of heat-related workplace fatalities found that most occurred during the worker’s first week on the job.

As part of its Heat Illness Prevention Campaign, OSHA offers a website to raise awareness of heat illness symptoms and prevention with educational and training resources in several languages. The site also links to the OSHA-National Institute for Occupational Safety and Health’s Heat Safety Tool, an app available for iPhones and Androids.

OSHA encourages employers and safety professionals to use the site to share examples of how they are keeping workers safe in the heat. In addition to featuring the best examples on its website, the agency will also feature them in its bimonthly newsletter “Quick Takes.” OSHA urges employers, employees and safety professionals to share their heat tips and photos on Twitter using the hashtags: #WaterRestShade and #ProTips.

Each year, thousands of workers suffer the effects of heat exposure and, in some cases, die as a result. In Kansas, Missouri and Nebraska alone, there were 13 heat-related hospitalizations and seven deaths associated with heat exposure between Oct. 1, 2014 and April 28, 2017.

Under the Occupational Safety and Health Act of 1970, employers are responsible for providing safe and healthful workplaces for their employees. OSHA helps ensure these conditions by setting standards, and providing training, education and assistance.