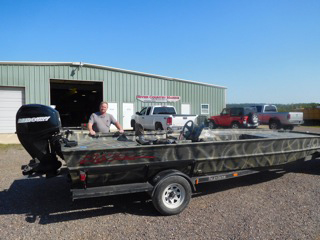 Blazer Boats of Ellington recently sent some much needed assistance to the flood-damaged areas on the Texas Coast.

Not able to send boats at the initial outset, the small family owned operation sent a crew to the Port Arthur area where the release of water from upstream reser­voirs was causing rivers and streams to rise despite the fact that the rain had ceased.

The Blazer crew arrived on site and their first task was delivering medicine to a family isolated by damaged bridges on both major high­ways and side-roads.

Over the next few days vaults and caskets were re­trieved and secured in a small graveyard that had been flooded for the first time in residents’ memo­ries; a cemetery more than a century old. More than two hundred people were trans­ported to safety.

Many of these removals were precautionary and for comfort, at least two dozen were from rooftops of struc­tures about to be enveloped by rising water.

The majority of those transported were taken to a makeshift aid station pro­vided by the Blazer crew; a station consisting of blue tarps for shade, a generator and box fans and forty cases of bottled water.

During their time South, the Blazer crew distributed a total of eighty cases of bottled water, numerous T-shirts and books—many to more permanent aid facili­ties.

“We knew we had to do something” stated Calvin Moss—Blazer co-owner. “We’ve partnered with the Ozark Heritage Project many times over the years, gener­ally for river clean-ups.

We’ve worked to save our environment, to preserve our culture. This time we got to help save lives!!”

Other jetboats were oper­ating in the Houston areas. One firefighter was quick to point out their advantage.

Jim Allen of Jasper noted “We used them and their pumps to fight fires; they weren’t a danger to people in the water with their props, they didn’t tear up when hit­ting submerged structures.”

Co-operative efforts of Blazer and OHP may be fol­lowed on Facebook page Stewards of the Ozarks.