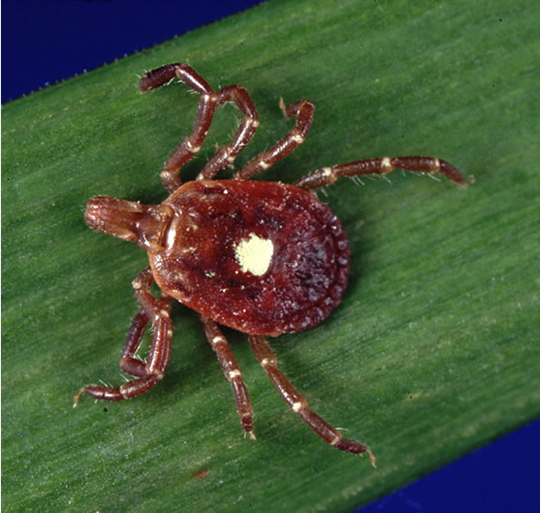 Ticks, Suspected Carriers
BOURBON VIRUS was first discovered to cause human illness in Bourbon County, Kan. when a man died after being bitten by ticks. The case is the eighth report of human disease associated with a thogotovirus globally, and the first in the Western hemisphere. As of May 2015, a case was discovered in Stillwater, Okla. (the patient fully recovered). In June 2017 a 58-year-old woman from Missouri died from an infection of the Bourbon virus after it had been misdiagnosed for a significant period of time. No specific treatment or vaccine is available. The virus is suspected to be transmitted by ticks or insects, and avoidance of bites is recommended to reduce risk of infection.

JEFFERSON CITY – The Missouri Department of Health and Senior Ser­vices (DHSS) and Centers for Disease Control and Prevention (CDC) worked with local public health agencies last week to test for evidence of Bourbon vi­rus in the blood of some Missouri state park workers.

The testing was done as part of a fol­low-up investigation into a recent case of Bourbon virus associated with expo­sure to ticks in Missouri.

CDC’s Arboviral Disease Branch will test each blood sample for the presence of Bourbon virus antibodies; these an­tibodies may indicate a previous expo­sure to the virus.

This follow-up investigation will help determine who might be at risk for Bourbon virus. It is believed to be spread by ticks, but this has not been confirmed.

Bourbon virus was first discovered to cause human illness in a Bourbon Coun­ty, Kan., man in 2014.

The virus belongs to the Thogotovi­rus group, and Bourbon virus is the only known member of this group to cause disease in the United States.

The best way to prevent tick-borne disease infection is to avoid being bit­ten by a tick.

Understanding a little about tick be­havior can give some clues on how to avoid being bitten. For example, one tried-and-true prevention measure is to walk in the center of trails to avoid overhanging brush and tall grass. This is effective because of the way some ticks seek a host, which is called “questing.” A questing tick will perch itself, front legs extended, on the stems of grass, low brush or on the edges of leaves on the ground. Using this ambush strat­egy, the tick waits until a suitable host brushes against the vegetation. Ticks do not jump, fall or fly and are generally found within three feet of the ground.

To find more information on ways to prevent exposure to ticks and the virus can be found on the DHSS website: http://health.mo.gov/.

If a person begins developing a fever, muscle aches, fatigue, headaches, an­orexia, diarrhea or a rash after exposure to a tick bite or tick habitat, they should seek treatment from a medical profes­sional and inform them of recent tick exposure.

For more information on ticks and the ongoing Bourbon virus investiga­tion, please contact the Department of Health and Senior Services, Office of Veterinary Public Health at 573-751-6062 between the hours of 8 a.m. to 5 p.m. Monday through Friday.