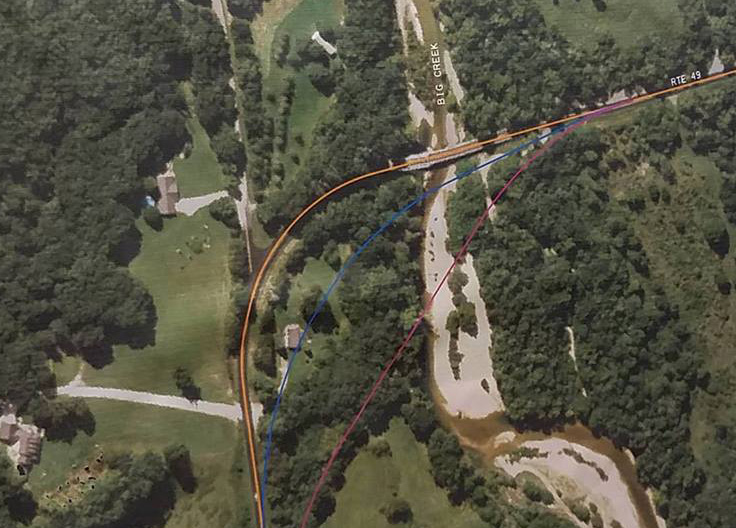 The Missouri Department of Transportation (MoDOT) held a public meeting on Tuesday, September 26, to discuss the upcoming Route 49 project which includes replacing the bridge over Big Creek just outside of Annapolis.

Set to begin in May 2018, the project aims to replace the bridge and make for a more stable roadway after major damage was inflicted up on it during the flooding back in the Spring.

It is estimated that there are around 1,200 drivers that cross the bridge each day with 12 percent being semi traffic. It has yet to be deter­mined how the road closure will be handled. MoDOT has given the public three op­tions in which to voice their opinion.

For a better idea of the dif­ferent routes, you can view a color map on MoDOT’s website.

Option one, the yellow route, is the cheapest and results in the bridge only be­ing repaired, not replaced, and the road could be closed up to four months. The cost of repairing the bridge is es­timated to be $1,550,000.

Option two, the blue route, also keeps the bridge open and is the most expen­sive of the three options. It would mean no road closure and will also rid the curve at the end of F Highway. The cost of completely replacing the bridge and adjusting the highway is estimated to be $4,4000,000.

Option three, the pink route, will keep the bridge open and be rid of the curve at the end of F Highway.

For both of the latter op­tions, the old bridge would remain open while a new one is being built. The cost of replacing the bridge and adjusting the highway is es­timated to be $4,100,000.

Want to offer your own input? Flyers are available to be filled out through Mo­DOT allowing community members to voice their opin­ions. Comments can also be made at www.modot.org/ southeast/news_and_infor­mation/public_meetings. MoDot asks for your input as they know that this partic­ular amount of bridgework will greatly impact the An­napolis area and those who travel on Highway 49 daily.