Nothing is quite as satisfying as putting time and energy into a project and creating something with your own hands.  For me, that satisfaction is even greater when it involves working with wood.  I recently had the opportunity to participate in a class instructed by Larry Lindeman with the Missouri Department of Conservation.  Larry is an Outdoor Skills Specialist, and he taught us about the traditional longbow, and how to build one of our very own.  But, before I get into that, if you ever have occasion to travel through Winona, make the time to stop at the Twin Pines Conservation Education Center.  Skyler Bockman, manager, and his staff will make your stop well worth the time!  There is a walking trail, plenty of picnic space, a beautiful pet friendly facility with educational exhibits for people of all ages.

Imagine a stick of firewood nearly six feet long.  Hickory.  Yes, it is a very hard wood.  We selected our piece of hickory, called a stave, which thankfully already had the bark removed, and began the process of measuring out our bow onto the back of the stave.  All the while, we were learning about the history of the longbow, and learning about the characteristics of the wood in our hands.  I learned that you don’t build a bow.  You remove the wood from the stave that isn’t the bow, and with a lot of patience, and a little luck, you end up with a beautiful and functioning bow.

To gain an appreciation for the traditional ways, no power tools were used.  After drawing out my bow onto the stave, I began cutting deep cuts down the length of the stave in order to help remove the large portion of the wood that wasn’t a bow.  Once cut into three to four inch segments, the large chunks were easily removed with a hammer and chisel.  These chunks were gathered to be used later on the smoker for some future pulled pork feast.  Break times were used to make my bowstring.  After wrapping a bowstring jig with several strands of Dacron string, they were gathered up and the long process of twisting began.  Hours of twisting 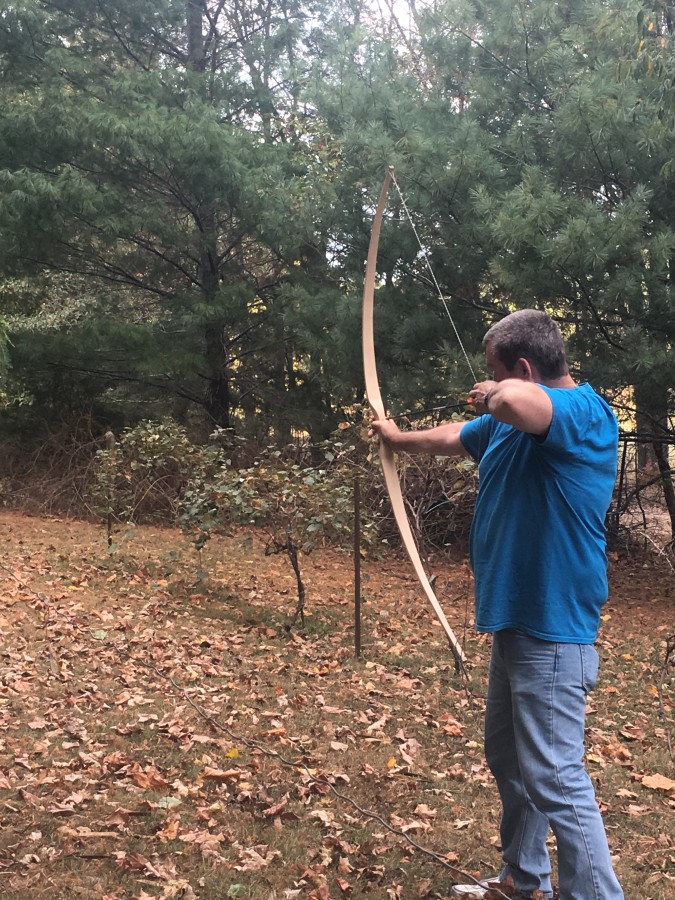 .  Fingers aching from twisting.  Enough twisting for now:  back to the bow.

Once thinned to about 3/8 of an inch, I switched from removing large chunks to carefully thinning the bow limbs with a draw knife, taking great care to never cut too deep.  Once the limbs were drawn down to a
smooth thickness, the draw knife went to work shaping the handle of the longbow.  Did I mention that hickory is hard? By this time, I could feel every muscle between my shoulder blades and in my arms.  Even my legs hurt from applying the pressure needed to hold the wood in the shaving horse.  After the desired thickness was achieved down both limbs and in the handle, the bow was turned on each side and further shaved down the the desired tapered width;  about 2” wide at the handle down to a mere half inch at the ends of the limbs.  Finally it no longer looked like a stick of firewood, but somewhat resembled a bow!  There was hope for success as I turned it over to remove the cambium layer from the back.  This is the dark brown paper-like wood that lies beneath the bark.  Thankfully for my shoulders, it came off rather easily.

I completed my final shaping with something called a cabinet scraper. It looks like a rectangular piece of sheet metal and when scraped along the surface of the wood, removes an ever-so-thin shaving that curls u
p like Shirley Temple’s hair.  By scraping and sanding, I slowly removed all marks made by the draw knife and worked it to a smooth surface.  I couldn’t  believe that what I was holding in my hands actually looked like a bow!  I was apprehensive about the next step.  Tillering a bow is the process of making it bend evenly down the limbs.  I actually sanded a bit slower to delay the moment of truth, the time when I will literally make or break my bow.

My finished bowstring was then strung in the nocks cut at the end of the limbs.  The bow was centered on the tiller and the string pulled to bend the limbs.  I listened for a dreaded “crack” but nothing happened as the bow began bending.  Pencil marks w 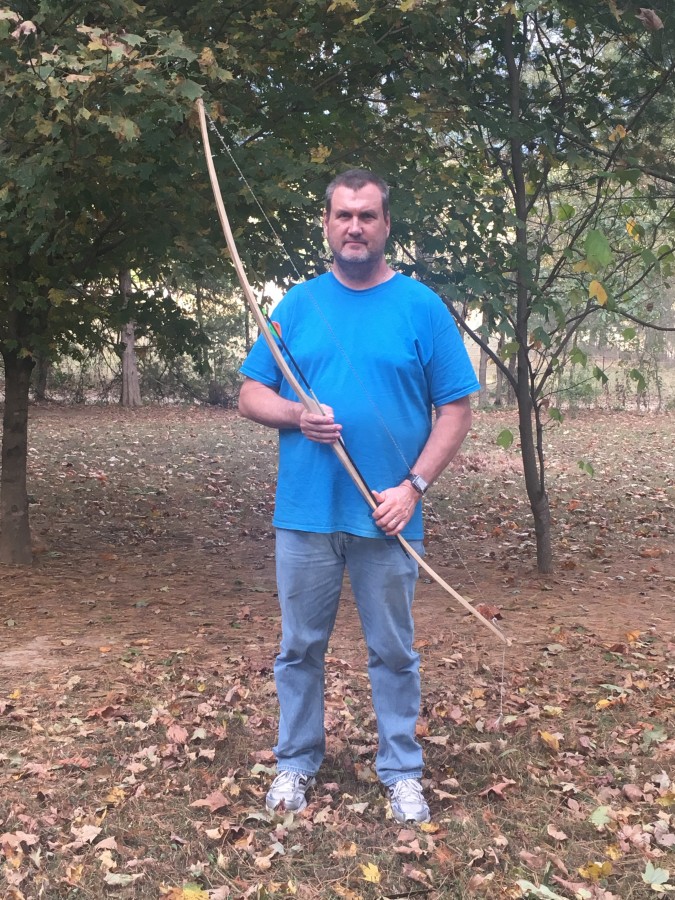 ere made on stiff areas and the bow was taken back to the shaving horse for more scraping.  Many trips to the tiller were made, each time pulling the limbs further.  Each time fearing the worst.  Finally, the bowstring was pulled to the desired 28” and the bow bent beautifully!  We restrung the bow to give the desired brace height, and it was complete!  We measured the draw weight with a scale and I was satisfied that it would be an effective hunting weapon if I ever mastered the skill needed to wield it.

I finished my longbow with several hours of final finish sanding, followed by some pecan stain, then protected by a good rubbing with linseed oil.  In all, I have invested about 16 hours in the building process.  Mastery in using it will take much more time.  A special “Thank you!” to A.J. Hendershott with MDC for taking the time to give me some pointers on how to shoot a longbow.  Of course, now that I have my beautiful handmade longbow, I’m hoping for the opportunity to also learn arrow making and arrowhead making.  It would be a dream to someday take down a deer with my bow, using an arrow that I made from raw materials.