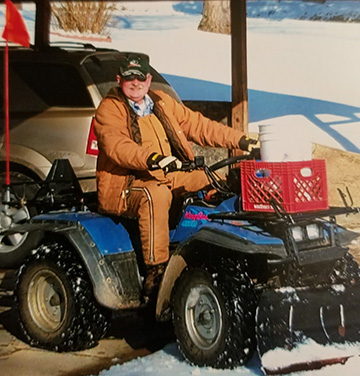 A much loved husband, father, grandfather, son, brother and friend, Grady White, 77 years of age, peacefully departed this life at Pilot Knob on Nov. 9, 2017, with his wife and son at his side he bravely confronted and fought Parkinson’s dis­ease for several years.

He professed faith in Christ at an early age and attended Ohl­man Missionary Baptist Church as his health permitted.

He graduated from Alex High School in 1958, and became em­ployed by TWA at the Kennedy Space Center in Orlando, Fla. during the Howard Hughes administration. He hired in as a la­borer but quickly became crew chief in charge of a $357 million inventory. He loved his job and was a very valuable asset to the company.

He married Jane Lawlor in 1960 and they were blessed with four beautiful children, Kevin, Vicki, Lydia, and Chris.

After retiring in 2000, Grady and Jane fulfilled their dream of owning a farm and moved to Bunker, and fell in love with the wonderful people of the community.

Grady was an active member of the Bunker Volunteer Fire De­partment, Chamber of Commerce and the industrial park board.

His hobbies included hunting, fishing, and telling stories at the: liar’s table” at Koy’s kitchen. He was also an avid football fan, with the Oklahoma Sooners being his favorite team.

Grady lost his beloved wife Jane of 42 years in 2008, and later married his wife Donna.

He was preceded in death by his parents, Ernest and Maudie White, two brothers Jerry and Joe White, and sister Joyce Bev­erly.

During his illness, Grady was blessed to have many wonderful caregivers, both at Meadowbrook Residential Care and Preferred Hospice with one outstanding nurse, Jessica Nichols. She went above and beyond for him. They shared a beautiful friendship and a mutual love of each other.

Grady was a kind man with a gentle soul and was loved by everyone who came in contact with him; with a sweet little grin and a twinkle in his eyes. He still captured everyone’s heart even through the challenges of his disease. He fought a good fight, he kept the faith, and won the race.