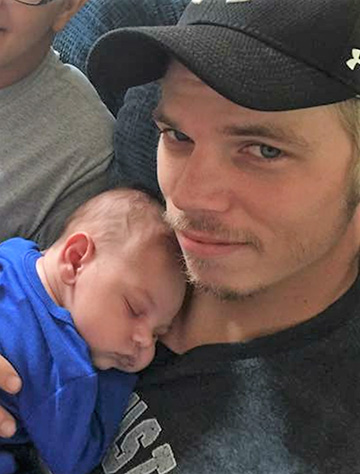 Jeffrey Lee Ribble Jr., born May 11, 1992, in St. Louis to Jeffrey Ribble Sr. and Sherrlyn (Workman) Edgar. He departed this life on Tuesday, Nov. 7, 2017, in Cadet at the young age of twenty-five years, five months and twenty-seven days.
Jeffrey was a 2010 graduate of Ellington High School and a member of Ellington First Baptist Church. He served as a member of the carpenters union and worked as a Carpenter building houses. He enjoyed hunting, riding four-wheelers and St. Louis Cardinals Baseball, but more than anything he loved spending time with his son and family.
Jeffrey is survived by his father, Jeffrey Ribble Sr. and step-mother Karen of Ellington; his mother, Sherrlyn Edgar and step-father Shawn, of Desoto; Significant other, Tierney Stevenson of Kirkwood; one son, Seth Hunter Ribble-Stevenson of Kirkwood; one brother, Eli Edgar of Desoto; three sisters, Crystal (Abe) Eoff of Hillsboro, Jennifer (Larry) Eichholz of Cadet and Emily Edgar of Desoto; Paternal grandfather, Lloyd Ribble of Black; Maternal grandparents, Benny and Carolyn Workman of Winchester, Tenn., Linda Workman of Charleston, S. C., and Paula Edgar of Desoto; Paternal Great-grandmother, Mabel Ribble of Black; as well as many other relatives and friends who will mourn his passing.
A visitation was held Sunday, Nov. 12 at McSpadden Funeral Home in Ellington with the funeral service following in the funeral home chapel. Pastor Doug Massie officiated. Burial was in the Webb Cemetery at Black. Serving as pallbearers were: Jay Ribble Jr, Chris Ribble, Mike Ribble, Abe Eoff, Waylon Molder, Will Molder, Kyle Allen and Taylor Martin.
Memorial contributions may be made to the American Cancer Society or to Crystal Eoff for baby Seth.