On Friday, July 13, Jo Janis celebrated her 102nd birthday and what a celebration it was! Jo is an avid fan of the St. Louis Cardinals and the family was taking her to the game that night. She is particularly a fan of Yadier Molina, the popular all-star catcher, known as “Yadi,” whose birthday, coincidentally, is also July 13. Jo said all she wanted for her birthday was to meet Yadi, but she knew she couldn’t. (The possibility of such meetings is remote.) 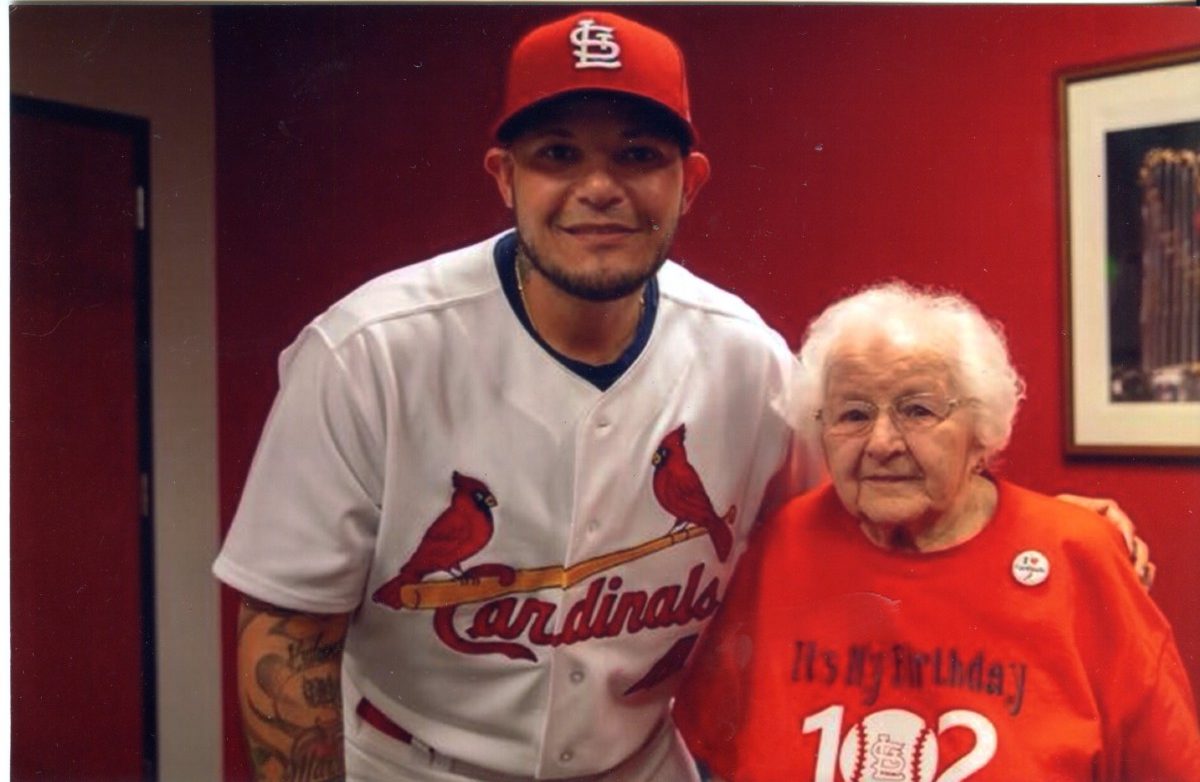 Her daughter had posted the upcoming occasion on Facebook, saying her mother would enjoy receiving cards. After that, things began happening. Someone designed a banner and a shirt, another baked a birthday cake decorated to look like a baseball, and so on. Her grandson was able to secure a field tour for her. A friend’s husband, Jim Zechman, who worked for KSDK came to the home and videotaped an interview which will be on Cardinal’s Kids Aug. 11. Another friend arranged to have Jo’s story passed on to the news department of KSDK. They sent a reporter, Brandon Merano, to interview Jo for the morning show. The show also was broadcast live on Facebook. Merano created the #HelpJoMeetYadi which went viral. Thousands wanted Jo to meet Yadi and the Cardinals’ organization complied.

After her field tour that night, Jo was escorted to the Cardinals’ Club House, She met Mike Shannon on the way, who offered her his congratulations.

In the Club House, Jo and her family were videotaped and photographed. Autographs were signed. Then who should appear but Yadi himself. Jo had been asked what she would do if she met Yadi and she said she’d “hug his neck.” She not only got the hug but got to kiss his cheek as well. He was most gracious and friendly. She had a birthday card for him and they spoke about their birthdays being on the same day – although 66 years apart. It was a short visit as he had to get out on the field, but it was a real thrill.