Most people cannot say they have spent their entire career in one job. Dale Jimerson can. Jimerson is set to retire in August after a nearly 45-year career at the Wayne County Journal-Banner. He plans to enjoy life, travel, spend time with his family, and have no set routine.

When asked if he wanted an open house or party, Jimerson declined. He wants to quietly retire. If you want to send him a card with well wishes, you may mail it to Jimerson in care of the newspaper at P.O. Box 97, Piedmont, Mo. 63957.

His first job was sweeping the print shop floor, “stuffing” papers (the process involved of inserting the advertising flyers into the pages of the newspaper), labeling newspaper and preparing them for mailing.

“Dale is a mechanic,” said Harold Ellinghouse. “In his younger years, he liked to work on Volkswagen cars. The knowledge he gained from rebuilding Volkswagens provided him the ability to maintain the small and large printing presses at the Journal-Banner. He has maintained the 12-page, roll-fed, offset printing press installed by my father, Charles, in 1965. Dad hired Dale shortly after he graduated from high school while I was attending college.”

When Jimerson started at the newspaper, Glen Tooke and Mike Allen were the pressmen. He hadn’t been employed very long before both men decided to change careers. Ellinghouse Publishing offered him the position as pressman. Dale jumped at the offer. He said that it was something that interested in and something he wanted to do.

“Dale Jimerson never missed work on Tuesday or Wednesday when we printed three weekly newspapers,” former owner and publisher Harold Ellinghouse said, “and that was over a 45- year period.” “I would describe Dale as a great team player who is very dependable, well-liked, even-tempered, and funny,” Ellinghouse said.

During his career, Jimerson has prided himself with the quality of product that he produces. He makes the process of operating the King Press look easy. In recent weeks, he has discovered there is a learning curve as he trains his replacement James Tucker.

During his tenure at the newspaper, Dale met Peggy Slevin and had two sons, raised his children, lost his mate, became a grandfather, and then married his coworker Janice Farris. Dale and Janice compliment each other. Both love to talk and never meet a stranger. Every person they meet, they deem, “a very nice person.” 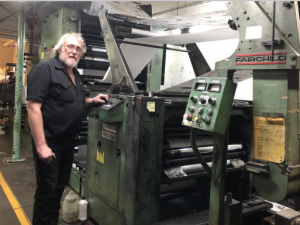 Dale Jimerson retired in August, ending a 45-year career at the newspaper.

“Dale is dependable,” Publisher Greg Hoskins said. “He is always willing to tackle a new challenge.”

In recent years, Dale has learned some basic computer skills, learned how to operate a digital negative machine and a multi-station inserting machine. Through the years, Dale has worked well into the night to make sure a job was completed by deadline. Many evenings, Dale could be found curled up on a shelf taking a short nap late, late at night. Or, more recently, staying at the shop until midnight on a Friday night because he didn’t feel right leaving coworkers who were struggling with a piece of equipment and a deadline to get a mailing to the Post Office.

“I have known Dale my entire life,” said Advertising Representative Addison Gipson. “When I very little, I was afraid of him because of his hair and beard. After I learned he was a dad, I warmed up to him. He has the biggest heart and would do anything to help someone.”

“I have always been fascinated with the entire printing process,” Gipson continued. “He allowed me to video tape him and answered my many questions. One of my favorite memories of him is when school children come tour the newspaper. He loves him job and the children are fascinated with him.”

“I was able to work with Dale for 16 years before Harold and I retired four years ago,” said Brenda Ellinghouse, former co-owner and business manager. “Dale’s kind, friendly personality made it a pleasure to be around him, and he always had an entertaining story to tell. (Ask him about the hospital story!)” “Harold and I enjoyed having Dale as an employee, and we treasure having him as a friend.”

Dale is the ultimate story teller. His smile and laughter will light up a room.

In the last forty years, Jimerson has learned new technology as the newspaper has updated some of its technology. Many of those processes have made Jimerson’s job easier. Through the years, Dale has worked with many different individuals in the printing department. For many years, he was paired with Gary Rose. He also worked many years with Jim Cladis, John Tucker, David Pickett, Tom Buckner, Jimmy Keith, Judy Dudley, and Matt Batson.

Practical jokes and many high jinx occurred in the print shop. Coworkers’ desks were disassembled and reassembled on the sidewalk, the back door booby trapped so that whoever opened it would be dusted with powder, vehicles hidden or left on blocks. At least one vehicle was wrapped in newsprint from top to bottom. How many coworkers received fake parking tickets written by Jimerson? How many turtles have you put in coworkers’ vehicle seats? How many people can fit in a very small company restroom?

“I can’t believe Dale is retiring, it’s hard to imagine the WCJB without him!” said David Amelunke. “There are so many memories from working with Dale, from walking through the shop and getting hit in the back with a flying razor blade to rig- ging a can of press powder over the door so it would dump on Dale when he came in late.

“My favorite memory is when we ‘stole’ his Volkswagen. He was gone delivering papers to the newsstands on Wednesday after the A section was printed and the paper was put together. We decided to steal the Volkswagen that he was driving at the time. It was a manual transmission and didn’t weigh much so it was easy to push. We rolled it into the back storage that was later converted into the pressroom. When Dale got back he thought that we had rolled it into the field beside the newspaper. (where the storage building is now.) He walked all over the field looking for the car. but couldn’t find it. We had gone home so we weren’t there to tell him where we hid it so he kept looking. Finally he decided to look in storage and found it.”

Amelunke is now employed at the Arcadia Valley Technical Center. He says that he learned many things from him.

“Working with Dale at the newspaper was fun and a great learning experience,” Amelunke said. “Dale taught me so much about printing and the darkroom.”

There are so many words to describe Dale. He is loyal, persistent, a great coworker, dependable, hard working, funny, one-of-a-kind.

“Dale and I both spent over 45 years working in the building at 101-103 West Elm Street in Piedmont. He has printed thousands of newspapers, business forms, and envelopes and provided a needed service to his community and county,” Ellinghouse said. “Through his dedication to print the best possible newspaper, Dale has always been an outstanding example for his coworkers.”

Karen Arledge worked with Jimerson for many years. “The word that comes to mind to best describe Dale is easy-going. In the 28 years he and I worked together I never saw him moody or out of control,” Arledge said. “He had several opportunities such as going home and finding Peggy unresponsive on the floor, or getting the news his house was on fire, or mangling his hand in the press. It was very hard to find a replacement for him while he recouped from that accident. I guess an- other word to describe him is dependable. You always knew he would be there and the papers would be printed every week. It is hard for me to imagine the Journal-Banner without Dale Jimerson. I wish all the best to him in his well- deserved retirement.”

General Manager Kim Combs has worked with Jimerson for 30 years. “It’s bittersweet that Dale is retiring,” Combs said. “I have always known this day would come but was hoping it would be later rather than sooner. Who is going to sing all day? Who is going to be the paper storyteller? Who will the one who is always willing to step up and lend a helping hand?

“I have been trying to think of the right words to describe Dale for weeks. Loyal and devoted to his job are probably the best descriptive words. When he was injured many years ago, many people not have returned to work. Dale was quite the opposite. He was determined to get back to the paper as soon as possible.”

When he announced plans of retirement, Dale worried if someone in the community would step forward to replace hi. Handing over the reigns of the press has been easier knowing he is being replaced by someone he calls a friend.

“I have been telling him for weeks that if he gets bored in retirement, that we’ll find a place for him to do something part time,” Combs continued. “I hate to see him go even though I know that he is tired and ready for retirement. I hope his retirement lives up to everything that he has dreamed.”

Doc. Dale Bob. You will be missed!