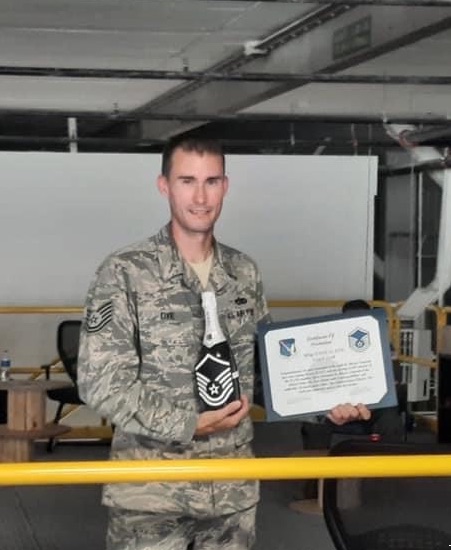 Dane Dye, a 2005 graduate of Clearwater High School, has received a promotion to Master Sergeant in the U.S. Air Force. Dane enlisted in the Air Force shortly after graduation and spent the majority of his 15 years in service assigned to units maintaining the A10 bomber jet.

While attending technical training at Keesler Air Force Base in Biloxi, MS, he was awarded the Humanitarian Service Ribbon for his help during the aftermath of hurricane Katrina. This was the beginning of many awards and commendations he has received.

Msgt Dye has deployed twice to South Korea and three times to Afghanistan. During his last deployment, he was awarded the prestigious “Maintenance Professional of the Year” award for his work as expeditor for the A10.

Dane, his wife Ashley and their two children are stationed at Randolph AFB, TX where he is the production superintendent in charge of personnel and resources that provide support for the pilot simulator training program.