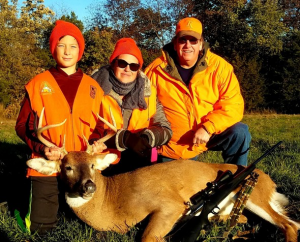 The Missouri Department of Conservation (MDC) encourages young hunters to get outdoors and discover nature this weekend for the early portion of youth firearms deer season Oct. 31 – Nov. 1.  Shooting hours run one-half hour before sunrise to one-half hour after sunset.  To participate, hunters must be at least 6-years-old and no older than 15 on opening day.

MDC notes the antler-point restriction does not apply to youth hunters using a firearms deer hunting permit during the youth portion.

Hunters may take only two antlered deer during the archery and firearms deer hunting seasons combined.  Each county limits the number of antlerless deer hunting permits you can fill during the entire firearms season.  More information on county restrictions can be found at https://short.mdc.mo.gov/ZL5.

During the youth portions of firearms deer season, adults who accompany youth hunters do not need a deer hunting permit.  The adult must be 18 or older and hunter-education certified or born before Jan. 1, 1967.  At all other times, hunters must have a filled or unfilled deer hunting permit to assist others in taking deer.

Additional information on hunting seasons and regulations can be found in MDC’s 2020 Fall Deer & Turkey Hunting Regulations booklet at https://short.mdc.mo.gov/ZXv.