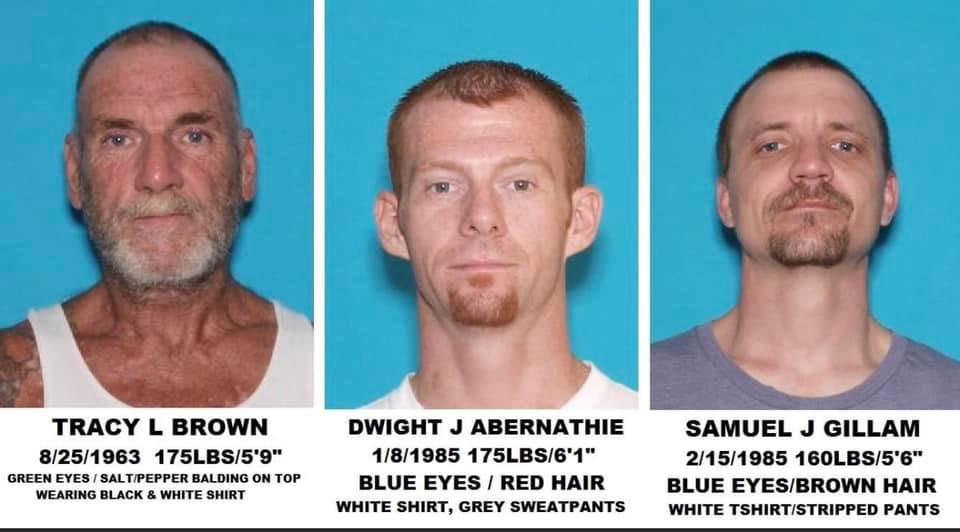 Authorities are searching for three men that escaped from the Iron County Jail at 4:24 a.m., Saturday, Jan. 16. According to authorities, the men are known to be armed and dangerous.

Authorities are searching for three men that escaped from the Iron County Jail at 4:24 a.m., Saturday, Jan. 16.  According to a press release from Sheriff Jeff Burkett, the inmates removed a large block from the cell wall to escape. They reportedly fled on foot.

Authorities are searching for Tracy Brown, 57, whose last known address was Iron Mountain Lake; Dwight Abernathie, 36, of Ironton; and Samuel Gillam, 35. Court records list Gillam with a Fulton address, but the Highway Patrol said he had been living in Ironton; Gillam also has ties to Park Hills.

As of Sunday evening, the trio was still on the lam.

The United States Marshals Service is assisting in the fugitive investigation of  Abernathie, rown, and Gillam. Rewards have been authorized up to $5,000 for information leading to the arrest of any of the escapees. Tips can be called into the U.S. Marshals Tip Line at 1-800-336-0102 or 1-877-WANTED2. All tips will remain anonymous. You may also contact the Iron County Sheriff’s Office at 573-546-4000.

“Officers followed up on over 50 leads throughout the day,” reads a post on the Ironton Police Department’s Facebook page. “Those leads did not result in the subjects being returned to custody, but information was obtained and additional follow up will occur until the subjects are back in custody.”

Brown is described as a white male, 5-foot 9-inches tall, with green eyes.  He has salt and pepper hair and is balding on top. Brown was last known to be wearing a black and white jumpsuit.

Brown was being held in the jail on charges of burglary. He had been in the jail since Nov. 4, according to Casenet.

Abernathie is described as a white male, 6-foot, 1-inches tall, with blue eyes and red hair. He was last known to be wearing a white t-shirt and grey sweatpants.

Abernathie was being held in jail on first-degree assault charges. Abernathie had been jailed since Sept. 18, according to Casenet.

Gillam is described as a white male, 5-foot6-inches tall, with blue eyes and brown hair. He was last known wearing a white t-shirt and striped pants.

Gillam was jailed on charges of interference with custody. He had been in the jail since Jan. 5, according to Casenet.