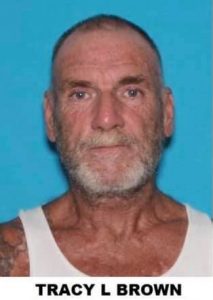 One of the men who escaped the Iron County Jail during the early morning hours of Saturday, Jan. 16, has been captured. Tracy Brown, 57, was taken into custody Wednesday night in New Mexico.

According to the U.S. Marshals Service (USMS), members from the USMS Eastern District of Missouri Fugitive Task Force developed information Wednesday that Brown and his girlfriend, Diana Thomas, had left the Denver, CO, area and were headed to Tularosa, NM. The information was passed on to the USMS Southwest Fugitive Investigation Team (SWIFT) in New Mexico.

The USMS of Eastern Missouri has been in contact with the USMS District of Colorado with regard to the fugitive investigation of Abernathie and Gillam.

A $5,000 reward is being offered for information leading to their arrest.

U.S. Marshals have been leading the investigation and manhunt for the three escapees since Saturday, when Iron County Sheriff Jeff Burkett made contact about the escape.

Gillam and Abernathie should be considered dangerous. Anyone with information on their whereabouts is urged to contact their nearest law enforcement office.