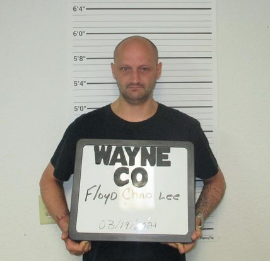 Wayne County Sheriff Dean Finch announced Friday that he had arrested a former dispatcher on suspicion of forgery and felony tampering with evidence.

The investigation into the matter regarding Chad Floyd started March 18, Finch said. It was based upon allegations a Wayne County dispatcher was being paid to pass drug screens for subjects in drug court.

“Subjects who are in drug court are required to submit to random drug screens at the Wayne County Sheriff’s Office,” Finch said. “The allegations were a dispatcher was being paid to show clean drug screens on subjects who were testing positive. Allegations were also made this dispatcher was providing narcotics information to subjects under investigation by the Wayne County Sheriff’s Office for distribution of controlled substances.”

“Former dispatcher Chad Floyd was interviewed and admitted to passing subjects’ drug screens, and admitted to giving information to other subjects regarding narcotics investigations,” he said.

Floyd is currently being held in the Madison County Jail.

“I have always held my employees to a higher standard and will not tolerate corruption within the sheriff’s office,” Finch said.