Our summer raffle is underway and our prizes this year are $250, $150, and $75 Visa Gift Cards. Look for our booths at various locations around the county until after Labor Day. 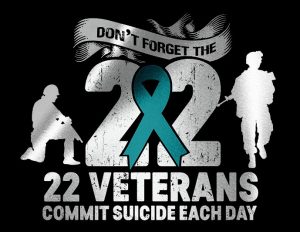 Our next meeting will be 2 PM, Sunday, 18 July. This is immediately after the dedication ceremony for our new home, the “Donald L. Cook / Billy J. Swyres Memorial Veterans Center.” The ceremony will be at 1PM, Sunday 18 July in Centerville. For more information, contact Jay Parks or Randy Tolliver at (573) 924-2382.

We will be performing a Flag Retirement ceremony on 17 July at the Courthouse in Centerville.  For more information, contact Randy Tolliver.

Active duty and veteran suicide is an urgent issue that Congress, the Department of Defense (DoD), and the Department of Veterans Affairs (VA), along with its stakeholders, its partners, and communities nationwide  must address. Suicide is a complex issue and influenced by a multitude of intersecting factors.   The DoD and VA are embracing a comprehensive public health approach that involves the individuals peers, family, and their community. This approach addresses the risk factors associated with suicidal behavior while promoting positive coping skills, feeling connected to other people, and access to mental health care.

To improve service member access confidential mental health care, lawmakers have reintroduced the Brandon Act. Named for Brandon Caserta, a 21-year-old sailor who died by suicide, the measure made it into the House’s version of the National Defense Authorization Act last year but was taken out in final negotiations.  Under the bill, all service members would have to tell their supervisor or commanding officer is that they had a “Brandon Act concern” to receive a confidential referral for mental health care.  The Brandon Act creates a system modeled off the process for victims of sexual assault, and would allow serve members to receive care without notifying their command or opening an official investigation. For more information on this or other legislation, please see https://www.govtrack.us/congress/bills/browse . If you would like to add your voice to urging the 117th Congress to pass this or other legislation, Congressman Jason Smith’s Washington office address is 2418 Rayburn House Office Building, Washington, DC 20515.  His email, phone and fax are is https://jasonsmith.house.gov/, 202-225-4404 and 202-226-0326.  His Poplar Bluff office is 2725 North Westwood Blvd, Suite 5A, Poplar Bluff, MO 63901, mailing address is P.O. Box 4707, Poplar Bluff, MO 63902 and the phone number is (573) 609-2996.

As we approach Independence Day, this is the first installment of a discussion of the events that lead to the Declaration of Independence.   The American Revolutionary War had started at Lexington and Concord in April 1775 and the Second Continental Congress in Philadelphia in May 1775.  By late 1775, many colonists no longer believed that Parliament had any sovereignty over them, yet they still professed loyalty to King George.  They were disappointed when the King rejected Congress’s second petition and issued a Proclamation of Rebellion. In January 1776, as the Kings position toward his American Colonies became clear to most Americans, Thomas Paine published “Common Sense”.  A recent arrival in the colonies from England, and Paine argued for independence and republicanism.  Parliament’s passage of the Prohibitory Act in February 1776 established a blockade of American ports and declared American ships to be enemy vessels, further strengthening public support for independence

Despite growing popular support for independence, Congress lacked the clear authority to declare it.  For Congress to declare independence, a majority of delegations would need authorization to vote for it.  Delegates had been elected to Congress by 13 different governments, were bound by the instructions given to them.  Several colonies had either prohibited their delegates supporting separation from Great Britain, or provided ambiguous instructions on the issue.  In April 1776, a campaign began to revise the Congressional instructions of individual colonies.  On 15 May, Congress passed two major resolutions.  The first, appointed a committee to draft a preamble to explain the purpose of the resolution. The second instructed Virginia’s congressional delegation “to propose to that respectable body to declare the United Colonies free and independent States, absolved from all allegiance to, or dependence upon, the Crown or Parliament of Great Britain”.   On 11 June, Congress appointed a “Committee of Five” to draft a declaration, consisting of John Adams of Massachusetts, Benjamin Franklin of Pennsylvania, Thomas Jefferson of Virginia, Robert R. Livingston of New York, and Roger Sherman of Connecticut. Next week, the committee presents a draft of the declaration to the Congress.

We are now seeking veteran’s memorabilia from Desert Storm until the present for an exhibit at the Reynolds County Museum. If you wish to donate or lend materials, please contact Randy Tolliver or Dan Dement at (714) 566-4942.

The VA one stop website is VA.gov Home | Veterans Affairs . You can use a Digital Service (DS) Logon or create a new account using ID.me.