Gerald Elvis Angel was born in Redford, Missouri on July 22, 1928 to Bert Lonzo Angel & Essie Goldie Bales Angel. He was 93 years of age. One of 10 children – all of them preceded him in death.

He married Erma LaVerne Phelps on May 6, 1947 and they enjoyed a full and loving life for 70 ½ years. They had 3 children – Sharon (Norm) Niedringhaus, Carol (Dale) Massie, & Cheryl (John) VanNoy.

He worked at Allied Construction Equipment Company in St. Louis for over 40 years. After moving to St. Louis for this job, he and LaVerne retired back to Ellington to a locati 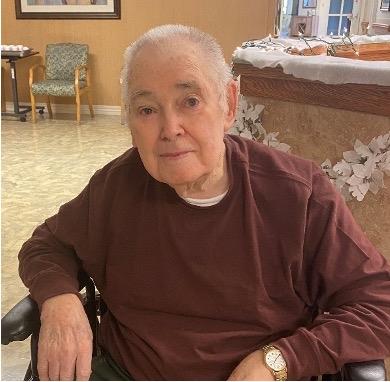 A lover of history and anything related to Reynolds County, he was well-known in town as the History Buff and enjoyed sharing his stories to whomever would listen. He would ride around in his Jeep looking at the Elk and visiting the farm where he had grown up. He enjoyed talking about Fort Barnesville, Indian Mounds, & the Bellevue Trail, among many other topics. He spent his recent years writing to numerous museum locations and political figures, sharing his knowledge of history and enjoyed receiving letters back. He was an inaugural member of the Reynolds County Museum where he and LaVerne spent many a day/night getting it ready for Spring Fever Days – the kickoff of every season. He enjoyed touring visitors around the many displays in his electric wheelchair in later years.
He leaves behind his 3 daughters and their husbands. He and LaVerne have 14 grandchildren, 1 preceded him in death and 21 great-grandchildren.