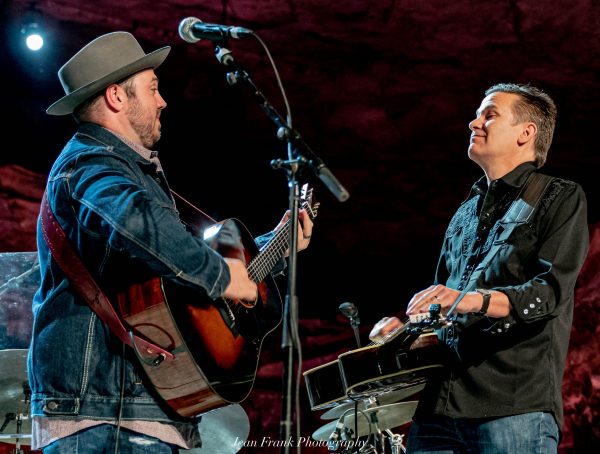 The Ellington Chamber of Commerce is pleased to announce Bluegrass duo Rob Ickes and Trey Hensley will be the headline artists at the Ellington Concert Series fall concert, Saturday, September 17th, 2022 at Barn at the Hamptons in Ellington, Missouri. The evening will also feature Missouri favorite Bluegrass band Alex Riffle and The Stiff Riffs, who will open the concert at 7pm.
When a 15-time International Bluegrass Music Association Dobro Player of the Year, 2X Grammy winner and Tennessee-born guitar prodigy who made his Grand Ole Opry debut at the age of 11, team up; you get a powerhouse duo that has electrified the acoustic music scene since 2016. That Bluegrass music team is Rob Ickes and Trey Hensley. This unique collaborative effort between two uniquely gifted musicians a revelation to traditional music fans on several counts. Rob Ickes is a longtime, well-established instrumental giant, and Trey Hensley is bursting with talent both as a vocalist and guitarist.
White-hot picking and stone country vocals are the driving force of the duo, but now with added grit and a nod to the rootsier side of Americana, all aided by the guiding hand of GRAMMY winning producer Brent Maher. Maher, known for his production and engineering of such diverse artists as The Judds, Faces, and Ike and Tina Turner, loved the duo’s demos and signed on to produce immediately upon hearing them.
On their new Compass Records album, WORLD FULL OF BLUES, the duo move beyond the acoustic-centric sound of their previous two releases (including the GRAMMY-nominated BEFORE THE SUN GOES DOWN) and juice things up with Hammond B3 and a horn section.
Guests include blues great Taj Mahal, who provides his unmistakable mojo to the title track, and country music legend Vince Gill, who joins the duo on an inspired rendition of The Grateful Dead’s moonshiner song, “Brown-Eyed Women”.
Alex Riffle & The Stiff Riffs is a Missouri-based bluegrass band that has been performing together since 2005. Members of the band include, Steve Walsh, Billy Watkins & Doug Kennedy, who have been playing music together for nearly 45 years, Alex Riffle, a SPBGMA award-winning banjo player from Poplar Bluff, who has been playing since the age of 12, fiddle player, Bobby Lewis, previously of the Bob Lewis Family band from Doniphan, Missouri, as well as accomplished lead guitar player, Drew Thurmond of Stanton, Missouri.
Alex Riffle & The Stiff Riffs is a band that’s enjoyable for both a bluegrass music-loving crowd and a crowd that has never heard bluegrass music before. The group has played numerous concerts & events throughout Missouri and nearby states, becoming locally well-known for their hard-driving bluegrass sound. The band’s repertoire, developed over the course of 45 years, includes hundreds of classic bluegrass songs, along with multiple classic rock, country and pop songs converted to the band’s own brand of bluegrass.
The outdoor concert will be held at Barn at the Hamptons in Ellington, Mo. The Barn has proven to be a favorite location of fans and musicians. Southern Country-Rock band The Steel Woods commented that “Barn at the Hamptons was one of the most unique venues they had to pleasure to play”. With this show, the 7th in the Ellington Concert Series, the Chamber exposes people to new music and varying genres of music. The idea of hosting concerts came about in 2016 to increase tourism to the area. “The idea is working because people who came to see past concerts like The SteelDrivers, Stoney Larue, Larry Fleet and Hailey Whitters come back for the next concert and in the course have discovered the recreation Ellington has to offer; “We hope they come for the concert and stay a day or two to experience the rivers, lakes and the beauty of the area” remarked Chamber member Christy Roberts.
With only 200 tickets sold, the event will be small, exclusive and up-close with the artists. “It is amazing that we can offer such highly acclaimed artists for music fans to enjoy,” said Roberts.
“We invite everyone who loves music, great pickin’ and a one of a kind show to come out on September 17th” for a great performance”. Bring your instruments for an ‘after the show jam session’ with local artists.
Information and tickets about the concert can be found at the Ellington chamber of Commerce web page or on the Ellington Chamber of Commerce Instagram and FaceBook page(s). Tickets will go on sale August 8th at http://ellingtonmo.com. For more information about Rob Ickes and Trey Hensley check them out at https://www.robandtrey.com. The Chamber has been able to offer this concert series through the assistance of the Taum Sauk Grant.