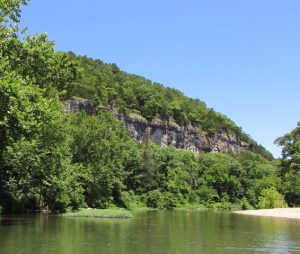 The Bluff and the Pipeline

The thrill of seeing the lower Big Piney with Jim Barr and Charlie Curran made me remember days from another time.  But everything about a river changes, and the changes when men are involved are never good.  It is funny how I talk about the days of my boyhood when the river was so perfect, clean and full and wild.  My grandfather talked of how much better it was when he was young, forty years before I was born. The Piney has suffered much since Dad paddled me down that lower-end of the river for the first time in the fall of ’59.

Pollution is one thing, but the filling of the river with silt, sand and gravel, the cutting of the big pines and coming of massive acres of pastureland is only part of what I see as the years go on. But it was destined to be, as numbers of men in those Ozarks increased beyond what anyone could have believed. The bluffs don’t change, though, and there are still some deep eddies that survive below them. Those eddies no longer have the big 15-pound redhorse or 12-inch goggleye, and the hellbenders seem extinct.   But memories are still there, and always will be for men like Charlie and Jim.

Charlie pointed to huge rocks along one bank and said, “those came crashing down from that high bluff yonder in the spring of 1942. “Scared folks half ta death,” he said “an’ some wouldn’t fish in this hole because they expected the whole bluff to follow soon after.”  One of the boulders which came down was a big flat rock along the bank jutting out into the water today.  Charlie told me that when he was 8 or 9 years old, just a few years after the part of the bluff had came down with a roar, he fished off of that rock with a cane pole and caught his very first fish from the Piney.

My Dad and I would float from Slabtown to Six Crossings or from the latter down to Ross Bridge, hunting ducks.  I had killed my first wood duck a couple of miles upstream from where Charlie had caught his first fish. But when we were floating from the crossings down to Ross Bridge in the early sixties there was the thrill of bouncing over the swiftwater chute crossing the pipeline.  and what a thrill that was.  The pipeline was about 2/3rds covered with gravel where it crossed the river, but it caused a 2- or 3-foot fall in the current that was a challenge.

But so many old-timers know so many stories of the river I still do not know.  For instance, Charlie related how nearly a hundred years back, several men from the area floated the river in a pair of wooden johnboats when the pipeline was only about half buried and they had all had too much to drink.  They didn’t get the bow of the boat pointed right and it swung sideways, tipped up, then filled with current-strength swift water , pinning one man against the pipeline. The boat crushing his legs and held him there.

Charlie told about what it took to free the screaming man from his horrible  pain. He was there for hours pinned against the pipeline waiting for an army truck that could get to the river to pull the boat off him.  He had plenty of time to drink in the future, sitting at home with no legs.  But his problem was one that many of today’s river runners have, coming in increasing numbers of brightly-colored canoes and kayaks.  Gallons of alcohol goes down the stream now and drugs of all kinds are with the weekenders as often as not.

I suspect the bluffs will see more and more of that and more drownings too. fewer of us like Charlie and Jim and I who can tell the stories, recalling the days of best  times of the river and the people who loved it.

From the Buffalo to the Current, from the Big Piney to the Arkansas Kings, from the Jack’s Fork to the Eleven Point, there will be some who drown because it isn’t the river they come to enjoy, as we did decades ago. The bluffs will watch them come and go, in great lines of bright colors and loud yells and screams.  These are different people now. There are few who see the rivers as God’s greatest creation, places to be still and listen and watch and know what places of reverence they are.

It is all different now, but the bluff which looks down from the west is exactly as it was when I first saw in 1959. As Charlie and Jim and I went down the river, last month I looked up at it and imagined it saying. I am the rock carved by the creator, and I will not pass.. Some things need to stay the way God made them  and some things will.  Too much will not.