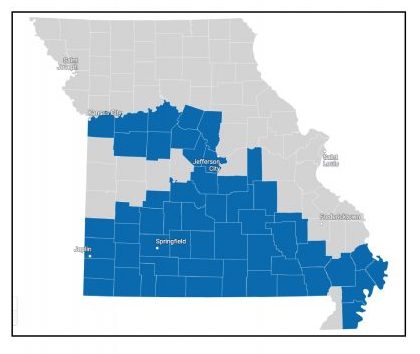 The topsoil is dry, corn yield is small, pastures are not growing and crops are stressed. Urban watering is extensive, pond and river levels decline and fire threat increases along with burn bans. These are all indicators of a moderate drought. 100% of Wayne County is suffering from a moderate drought. When compared to July 2021 drought is up 100%.
Currently Wayne County is suffering from a moderate drought. Within this month we will still see development of a drought. In the short term there is not much hope estimating that we will still see a drought. In the long term however, it’s estimated to be abnormally dry to moderately wet.
All of this information was predicted by the E.D.D.I. The Evaporative Demand Drought Index is an experimental drought monitoring and early warning guidance tool. It examines how anomalous the atmospheric evaporative demand is for a given location and across a time period of interest. This experimental subseasonal E.D.D.I. forecast shows projected evaporative demand for the next two weeks and four weeks from the CFS-gridMET dataset at a 4-km gridded resolution.
The max precipitation for this summer so far was 0.47 in. on June 26. The max temperature for this summer so far was 102 degrees fahrenheit on July 17. It is estimated that 10,920 acres of soybean are in drought, 9,280 acres of hay are in drought and 6,343 acres of corn are in drought. It is also estimated that 7,062 cattle are in drought and 663 sheep are in drought. Currently there is no wildlife in danger.