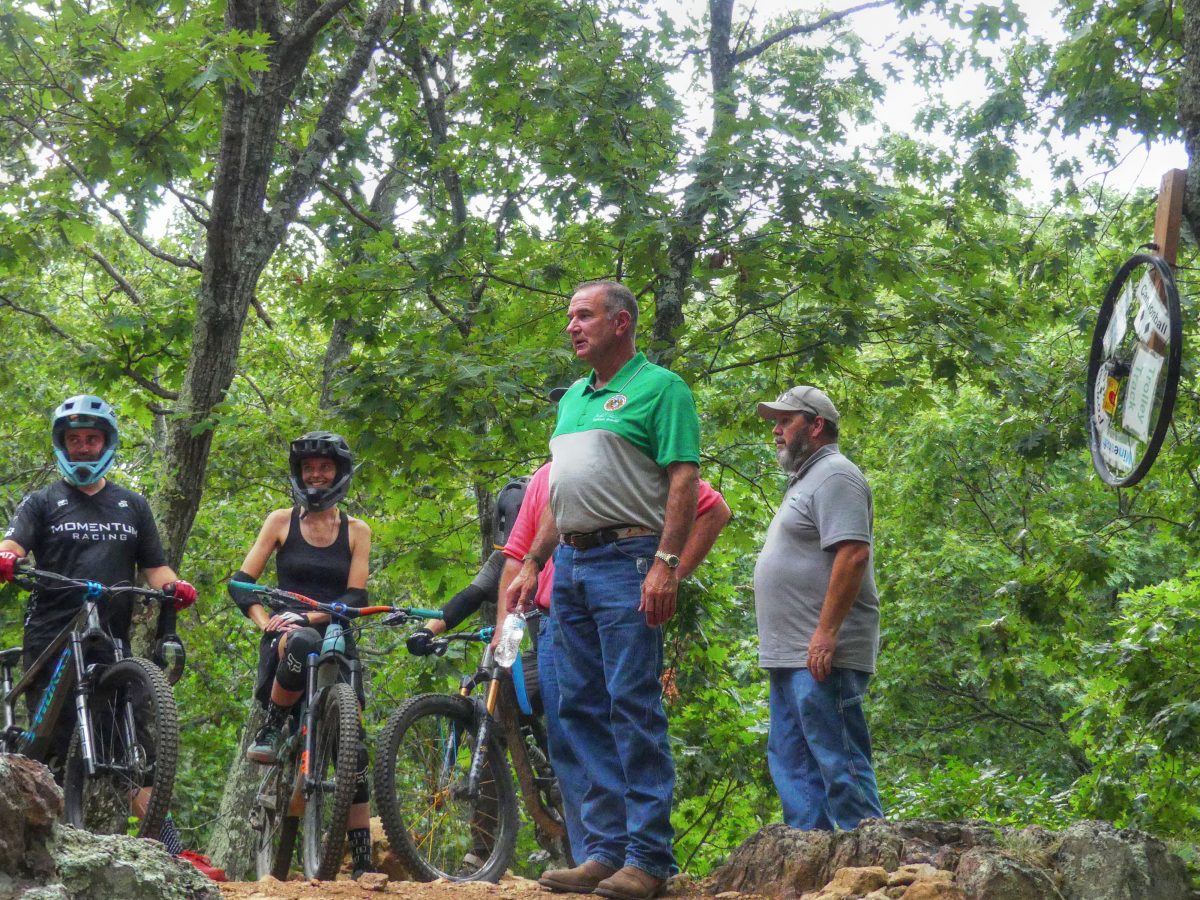 Mike Kehoe at the top of Shepherd Mountain.

By Susan Smith Kline
Mike Kehoe, the lieutenant governor of Missouri visited our area on Thursday, July 28th.
Mr. Kehoe had heard so much about Shepherd Mountain bike park that he wanted to see it. Also in attendance were Elaine Gannon who is a member of the Missouri Senate, representing District 3, Chris Dinkins from the Missouri House of Representatives, District 144, Donna Hickman, district office director for Congressman Jason Smith, Shelby Chan, mayor of Pilot Knob, and Jim Scaggs, Presiding Commissioner of Iron County. Unfortunately, Ironton’s Mayor Bob Lourwood was unable to attend.
Jim Erpenbach started things off by talking about Phase II of the bike park and the funding needed for that. Phase II would add 12 more miles of trail that would be perfect for people just starting with biking. Something the entire family could enjoy together.
Elaine Gannon said that on the drive here, entering Iron County was breathtaking. She said she was hooked on the bike park and that this was ‘God’s Country’.
Mr. Kehoe said that he is getting the word out about Shepherd Mountain bike park through the Governor’s Conference on Tourism. He also stated that he was a huge fan of state parks. He spoke of agriculture being #1 in Missouri’s economy with tourism being #2. 42 million dollars was spent through tourism pre-covid, now it is at 30 million but he states that the numbers are once again climbing.
He continued by saying that the bike park is a ‘shining feature hub’ and things tend to grow like spokes from the hub and he is excited to see how the area and tourism will build from that. He also said that the director of tourism loves our bike park. Mr. Kehoe went on to say that at present with Phase 1 of the bike park finished, it brings in day visitors, but that Phase II will bring in overnight visitors which will generate much more money for our area.
Mr. Kehoe was thrilled to see so many members of the Arcadia Valley Chamber of Commerce in attendance. He said, “The most active communities have the best chambers. You will have to get creative to procure the funding to get Phase II going, but communities that pull together often find success.”
Chuck Correll, chairman of the tourism committee – Arcadia Valley, also a board member of the Arcadia Valley Chamber of Commerce and a contributing member of the Valley Growth Initiative (bike park) said, “After we talked a bit, it was clear Lieutenant