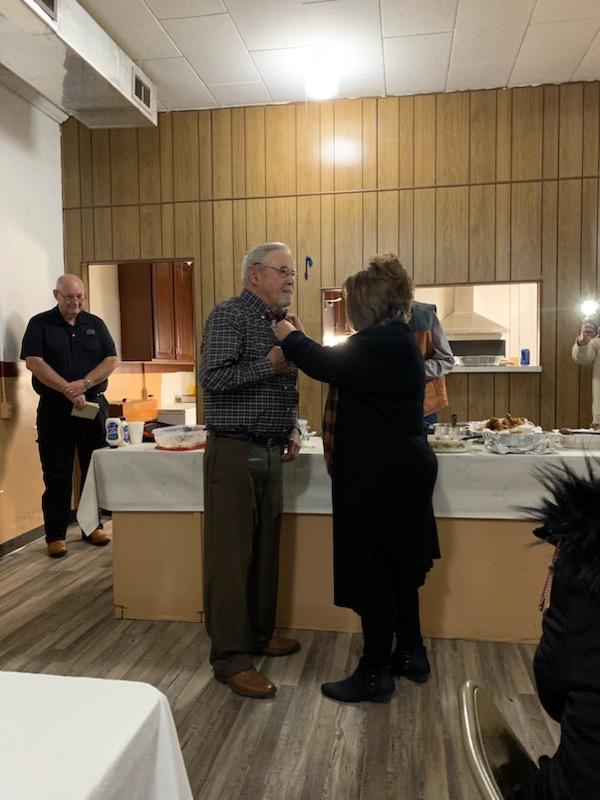 On Thursday, January 12, Greenville Lodge No. 107 A.F. & A.M. met for a family night celebration between members and their spouses.
A highlight of the evening was the presentation of the 60-year Masonic jewel to C.L. “Buck” Rhodes, a longtime staple of the Greenville community. The ceremony was presided over by W.B. Lavern H. Daves, R.W.B. Ted Marlow and W.B. Jerry Gowen. The Masonic jewel was presented by Pamela Smith, daughter of Rhodes.
Carroll L. “Buck” Rhodes was recommended to Greenville Lodge No. 107 by his father, the late W.B. Cecil F. Rhodes and the late Brother Corprew Jones. Rhodes was initiated into Freemasonry at Greenville on February 24, 1960, passed to the degree of Fellowcraft on November 17, 1960, and raised to the sublime degree of Master Mason on January 28, 1961. He and his late first wife, the former Kathern (Rainwater) Rhodes, later joined the Greenville Chapter No. 337 Order of the Eastern Star on March 9, 1964.
Rhodes journeyed through the chairs and offices of the Lodge ranks and served as Worshipful Master of Greenville Lodge No. 107 for the 1973-1974 Masonic year.
The Masonic heritage of the Rhodes family is richly deep within in the Greenville community. The great-great grandfather of C.L. “Buck” Rhodes, the late Matthew Rhodes (1828-1878), was initiated into Freemasonry by the Johnson Lodge No. 158 A.F. & A.M. (old Greenville) over one hundred and fifty years ago on May 21, 1870. Since then there has never been a period of time that descendants of Matthew Rhodes have not been members of the Masonic fraternity at Greenville.
Buck Rhodes will be long remembered as a coach and educator in the Greenville RII School district in the 1970’s and operating the Rhodes Texaco on Front Street in Greenville during the 1980’s. He later retired from Briggs and Stratton in Poplar Bluff.
He and his late wife have two children, twin daughters, Pamela and Paula, and several grandchildren and great-grandchildren. Rhodes is now married to the former Emalee Franklin and they reside in Poplar Bluff. He is a longtime member of the New Hope General Baptist Church at Silva and he and his wife attend the First Baptist Church of Poplar Bluff.
Also in attendance for the special presentation were other longtime members of the Masonic fraternity; Paul Bridges of Silva (57-year member), Lavern Daves of Silva (63-year member) and C.L. “Pix” McLane of Greenville (62-year member). These three, along with Rhodes, have been longtime friends since high school days.
The evening was enjoyed by all and well attended.